Finally, I just don’t buy the popular notion that creating doe factories is a bad thing. So long as my habitat can support them, I really, really, REALLY want good numbers of does on my properties. In fact, I want as many as I can have, without habitat degradation. The ones that bed and feed on me are my very best friends. They help keep the bucks busy there, instead of on the neighbors.

In all the properties I’ve done hands on, long term management on, I just don’t see the bucks being driven out by does. By the time I start getting major improvements done and continuing on into the foreseeable future, I can’t think of a property that I didn’t suck in and hold way more does than the neighbors. At the same time, I have way more bucks than they do, too. Sure, during spring fawning, those buck numbers drop, but even then they are still higher than the neighbors (tip: share intel with your neighbors…IMO, the benefits almost always outweigh the downsides. Once they realize you are improving your habitat, and they all figure it out eventually, they’ll almost always believe you have better deer than them, anyway, often even better than you really have…The locals all believed I had a 300″er running around one property. In reality, my top ender there was mid 180s. That’s a GREAT buck, but not as tempting to go looking for to poach as a 300″er). 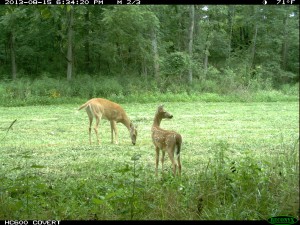 Some properties don’t hold bucks well. There’s a laundry list of potential reasons for that, but I just don’t see too many does being one of those reasons. I’m not saying that’s never happened anywhere, ever. What I am saying is that on somewhere over 30 different properties I’ve managed and all the other’s I’ve had a hand in managing, I haven’t seen that happen myself one time. Until I see that, I’m going to have a real hard time believing having a lot of does is a bad thing, SO LONG AS THEY AREN’T DESTROYING THE HABITAT.