For as much as letting bucks walk until they mature is covered, a key component in the equation for growing giants is missing. When managing deer genetics, many bucks should never be allowed to get old. When they are, the results can be very negative.

A prime example is a 1500 acre chunk owned by a group of hunters in my home state of Wisconsin. The mission of this group is simple. They want to consistently harvest bucks above 150 inches. They certainly get their fair share, but in 12 of the last 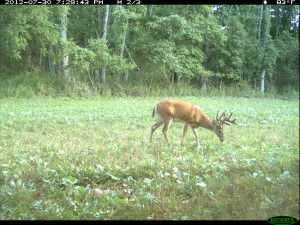 At the same time, the hunters on the neighboring properties, none of which having as high of standards, took bucks that grossed above Boone every season. At first glance, this seems to defy logic. After all, shouldn’t you be killing bigger bucks if your minimum is significantly higher than any of your neighbors?

The answer is often no. On tightly controlled ground, you commonly hurt yourself by passing up bucks that don’t score high enough. Setting one flat minimum inches on antlers doesn’t work well at all.

Let’s look at this a little deeper. On that 1500 acre chunk of superb habitat, many, many bucks don’t have it in them to hit 150”. Face it, even with the surplus of prime feed that the property offers, a lot of 8s will never hit 150”. Heck, even many that can won’t until they are at least 5.5 years old.

Also keep in mind that dominance has next to nothing to do with antler size. Though many factors play into it, health, being middle aged, temperament and the level of competition are the biggest ones. When a property has a surplus of prime aged 8s running around, chances are much greater that they will occupy the upper rungs of the buck dominance ladder. A common result is that they displace many of the other mature, yet subordinate bucks.

Think about it logically. Why would a buck hang out one place where the competition and his odds of getting beat up are both significantly greater than if he just shifts his home range a little?  When managing deer genetics you don’t want 140” 8s displacing your 160” 10s!

The solution to this is to base buck harvest on potential, as opposed to pure inches. This may sound complicated, but it’s really quite simple. 3.5 year old and older bucks sporting short tines and 9 or less points should generally be removed. Allowing bucks to reach 3.5 years and then applying the 10 point rule is the first step when managing deer genetics.

Next, remember that when judging a buck for removal good mass is not their friend. That typically indicates that the tines are already about as long as they’re going to get. Besides, a lack of mass also screams young buck in most settings. Additionally, short brow tines are a limiting factor. If an 8 has 2 inch brows at 3.5 years of age, chances are next to nothing that he’ll suddenly have 6 inchers at 4.5 or older. Since he only has 6 tines to begin with, having 2 of them being short is a huge negative. 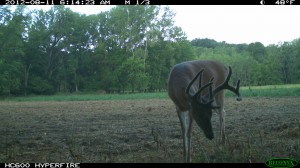 managing deer genetics means they get to grow old sometimes-

It shouldn’t be overly surprising that thin bucks with a lot of long points are the ones to save. It gets even sweeter when the rack boasts stickers and/or drop times. If you truly want to manage for top end bucks, these are the animals that should be left until they hit at least 4.5 years of age, and 5.5 is that much better if you are managing deer genetics.

On the flip side, that 130” 3.5 year old 8 doesn’t have far to go. At 4.5, he’s likely added some, but is still probably no more than 140”. Unfortunately, he’s also a rack busting brute that the bucks you really want have to compete with. That is, unless they relocate to the neighbors and enjoy the easy life.  Killing him at 3.5 years of age provides far more benefits than downside when managing deer genetics.