New York food plots for deer consist of either annuals like corn and beans planted in the spring, or annuals, perennials and bi-ennials planted late summer. Today we will focus on a strategy for attracting bucks in the early bow season and until the first few hard frosts in areas where the deer feed heavily on clover, alfalfa or soybeans all summer long. Described as a green to green transition, this New York food plots for deer strategy is a dynamite way to get close shots at the biggest deer on your property.

As summer rolls into early fall, most of the plant life is shifting the focus from growth to seed production and energy transfer to it’s root system. When this happens your deer herd will shy away from previously attractive soybeans, clovers, forbs and grasses because as they stop growing, they just do not taste as good. Your job as a hunter is to find what they are switching over to and hunt that source. Acorns are key this time of year but they are everywhere and hard to hunt. Your best strategy is to give them some fresh green growth that is tasty and attractive. A late season planting is the best fall food plots for deer strategy in this scenario.

Nothing will turn the switch faster on which New York food plots for deer your herd is using quicker than that first killing frost. Within days the beans all yellow and virtually all plant growth is done for the year. Certain annual grasses such as cereal rye, winter oats, and winter wheat as well as triticale are a super draw for the next 3 – 6 weeks or longer depending on snow fall amounts and where you live. In New York I plant these cereal grains in late August, preferably the last week. I may fudge earlier or later if the clouds say rain, but if I can get these grasses in late August I am rich with deer in the early bow season. They will withstand frost after frost and keep right on growing, providing one of the highest quality, lowest cost deer attractants you can buy. Look for these ceral grains to be present in seed blends for food plots and you have a good mix in your hands.

New York food plots for deer as a nurse crop

Do not ignore the power of these crops as a nurse crop in your New York food plots for deer. Add clover, alfalfa, or vetch or any other perennial to 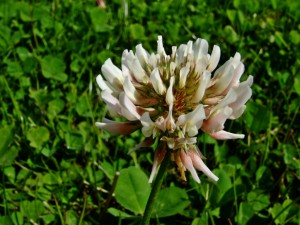 the blend, and these perennial crops will receive minimal pressure in the fall allowing them to establish their root systems and thrive the next few years. It’s a killer New York food plots for deer strategy.

I prefer to establish these small green plots by first picking the tree I want to hunt. It’s much easier to pick an area to plant, but the best plots are always strategically located where deer like to travel, and more importantly in spots you can access without spooking and educating deer. If you can only hunt it once it’s a waste of time to play with. I also like to keep these spots

small. On my farm I transition the deer from a 3 acre soybean field to a 1/10 acre green spot. I can almost shoot the whole plot with my recurve. Every one of the deer I watch in the beans in July and August will transition to the only green growing chow after the first hard frost. Like fish in a barrel? Hardly. But it is one of the best New York food plots for deer.